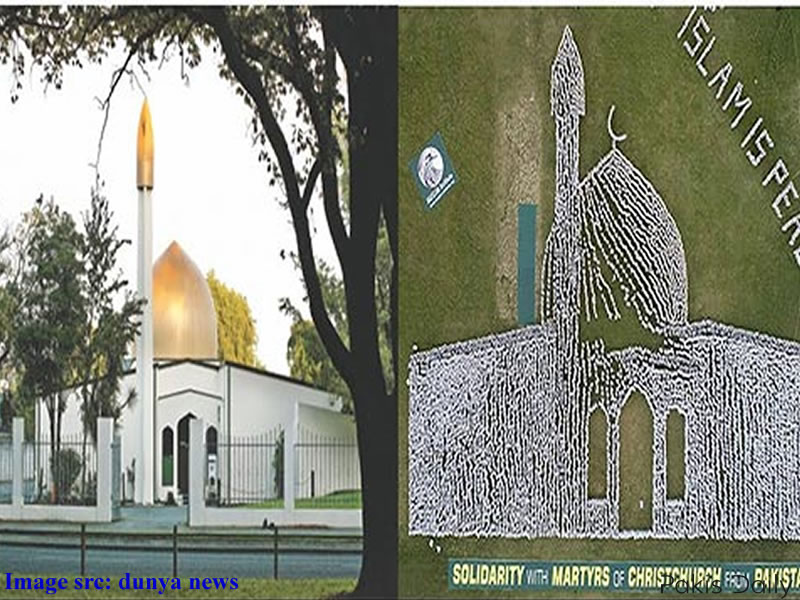 Thousands of Pakistanis clad in white have gathered in the central city of Jhang to create a human image of New Zealand’s Al Noor mosque in Christchurch city, where 50 people were killed by a white supremacist four weeks ago.

Drone images showed worshippers standing in formation on Friday, their snow-white traditional shalwar kameez and prayer caps in stark contrast to the emerald green of a public field, as a second group formed the words “Islam is peace” nearby.

Huge New Zealand and Pakistani flags were also shown along with a massive banner which read: “Solidarity with the martyrs of Christchurch from Pakistan”.

The tribute was organized by the Muslim Institute, a non-government organization aimed toward promoting peace and stability in the Muslim world, which also released the drone footage.

Brenton Tarrant, a 28-year-old Australian and self-avowed white supremacist, has been charged with 50 counts of murder and 39 of attempted murder after opening fire at the Linwood and Al Noor mosques on March 15.

Nine of the victims were of Pakistani origin. One, Naeem Rashid, was posthumously given an award for bravery by Pakistan after he apparently attempted to tackle the gunman before being shot.

Tribute organizers praised the New Zealand government after what had been a “very tough time” for Muslims in the country – especially Prime Minister Jacinda Ardern.

Her response “not only soothed the wounds of Muslims but also assured them that Muslims in their country safe”, said Sahibzada Sultan Ahmad Ali, a religious scholar and one of the organizers.

“We worked really hard to make this model,” one participant, Noor Hassan, said of the tribute. “It was so that we were ready to stand like this for the whole day.”