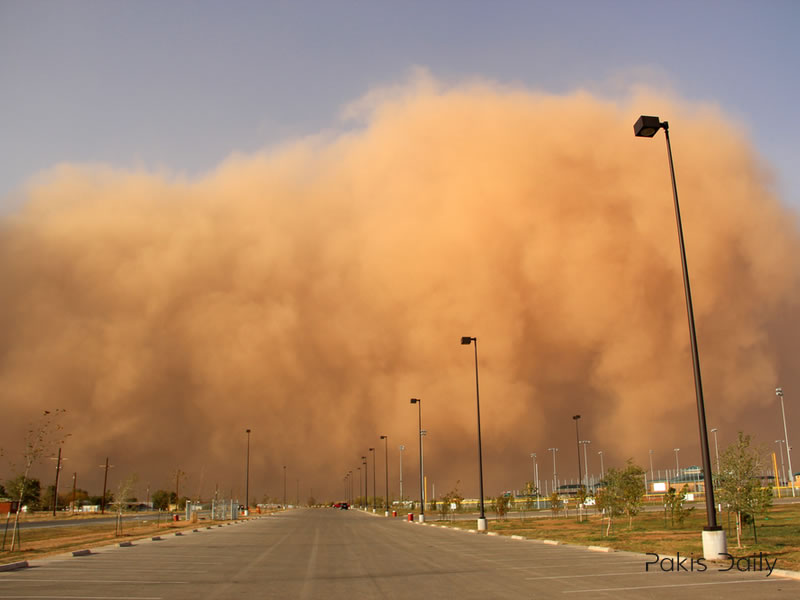 KARACHI: At least three people were killed and 20 others injured as an intense dust storm strike the metropolis Sunday night and continued Monday morning, dispersing sand around the city, downing trees and blowing away roofs in some areas.

Incidents of wall and roof collapses have been reported in Korangi, Landhi, Malir, Lyari, PECHS, Peoples Chowrangi and Surjani Town.

A man passed away as a tree fell on him near Peoples Chowrangi, while two children were killed in separate incidents. Five students were harmed and rushed to a local hospital as the roof of their school situated on Tipu Sultan Road collapsed, rescue sources said.

The imam of a mosque at the fish harbour was hurt as the mosque’s makeshift roof collapsed, sources said. Two people were harmed in Landhi No 3 as a part of a wall of their house collapsed, rescue sources said.

At least 8 fishermen are missing after their boat overturned near Rehri Goth.

The sudden dust storm included howling gales and hampered visibility on a lot of major roads. The wind was so powerful that it ripped off tin walls and knocked out power cables in some localities, blocking off electricity.

Strong winds with dust continued to gush on Monday morning with light rain in some areas, including Town and II Chundrigar Road.

Some flights from Jinnah International Airport were cancelled or delated last night due to the dust storm.

On the other hand, singer Fakhr-e-Alam warned against the winds throwing off garden furniture. He said: “Garden furniture in one of my neighbours’ house flew like a projectile and crashed into his vehicle windscreen breaking it.

Shehzad Roy tweeted a picture of his car that was parked in his car garage however covered in loads of sand.